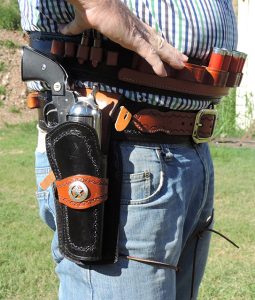 Western Action – also known as Cowboy Action, Single-Action Shooting or 3-Gun Action – is very popular in the States and has gained in popularity due to its use of multiple firearms… or maybe it’s the dressing up and having a ball of fun that’s increased their numbers?

You get to choose your western moniker, use a shotgun, lever-action rifle, and it’s the only discipline where you can wear (and holster) two pistols at any one time. What’s not to love?!

It’s been in Australia since the 1990s and is our fastest-growing outdoor sport. You start by strapping on two cloned single-action pistols – yep that’s right, the ones where you have to pull back the hammer before you can fire, with the old iron sights.

Now you’re starting to look the part – the combination of holsters are mainly double-strung like the ones you would see in a good ol’ John Wayne movie or one strung and one cross-draw holster which is drawn across the body. It is really personal preference with both having advantages.

Right, now get yourself a rifle, the most common being a lever action. Winchester 73s & 94s are really hard to come by, so we mainly use Marlin 1894 & Uberti 1873 with a few pump actions in use. The most common caliber used in Australia is .38 special or .357 mag, in both pistol and rifle, although you will see everything from the real cowboy caliber 44-40 to 45 long Colt and many others. You’re nearly there.

You will need one more firearm – the trusty shotgun which in Australia is either a side by side with none of those fancy ejectors or a lever action 1887, all mainly in 12 gauge. Our American cousins have the advantage of using the 1897 pump action which is prohibited here.

You will be loading two at time only and the shells will be chucked from the side-by-side or levered with the 87. Now you wouldn’t be a cowboy without some real cowboy attire… boots, hat and cowboy clothes! Yep that’s right, we do really step back in time.

But don’t be fooled – this is a highly skilled sport with speed and accuracy, also a degree of wit needed to manoeuvre you through the sometimes tricky scenarios.

What’s missing? Every cowboy has to have a cool name like the “Duke” or “Calamity Jane.” I’m sure when you were a kid you didn’t use real names! Here is your chance you get to pick & register an alias; a little bit hard to get use to at first but after a while you will love it! Look out, you’re ready to become a member of the family of single-action shooters who will greet you and welcome you into our sport – a sport which is shot from the young age of 11 years old through to their grandparents.

Be prepared to be thrown into a whole world of FUN!